If you still don’t see the massive movement with Social Media, take a look at these 30 amazing social media facts. 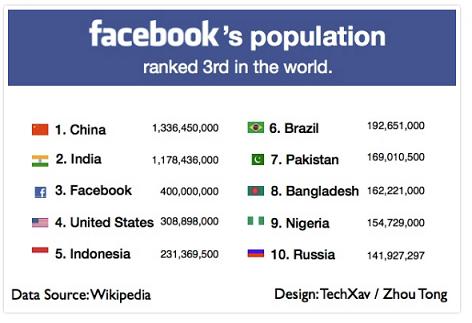 1. If Facebook were a country it would be the world’s 3rd largest behind only China and India
2. Years to Reach 50 millions Users: Radio (38 Years), TV (13 Years), Internet (4 Years), iPod (3 Years)…Facebook added 100 million users in less than 9 months…iPhone applications hit 1 billion in 9 months
3. Social Media has overtaken porn as the #1 activity on the Web
4. The 2009 US Department of Education study revealed that on average, online students out performed those receiving face-to-face instruction (http://www.nachi.org/documents/US-Department-of-Education-Online-Education-Report.pdf)
5. The % of companies planning to use social networking to find and attract candidates this year ….80%
6. The fastest growing segment on Facebook is 55-65 year-old females
7. Ashton Kutcher and Ellen Degeneres have more Twitter followers than the entire populations of Ireland, Norway and Panama
8. Hulu has grown from 63 million total streams in April 2008 to 373 million in April 2009
9. More than half of Twitter usage is on mobile devices…people update anywhere, anytime…imagine what that means for bad customer experiences?
10. Generation Y and Z consider e-mail passé…In 2009 Boston College stopped distributing e-mail addresses to incoming freshmen 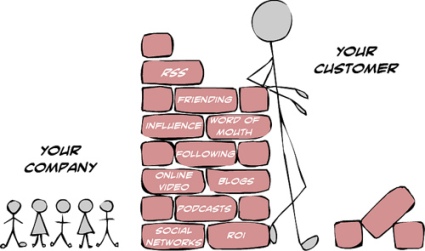 11. There are now well over 200,000,000 Blogs published online worldwide
12. About 54% = Number of bloggers who post content or tweet daily
13. Because of the speed in which social media enables communication, simple word of mouth has become world of mouth and happens via word of mouse
14. 67% of global online population visits social networks and blogs (Nielson Online, 2009)
15. About 25% of search results for the World’s Top 20 largest brands are links to user-generated content
16. Roughly 34% of bloggers post opinions about products & brands
17. About 78% of consumers trust peer recommendations (Nielson Report, 2007)
18. Only 14% trust advertisements (Nielson Report, 2007)
19. Only 18% of traditional TV campaigns generate a positive ROI
20. Companies no longer control the message of their brand, the consumers do. Ever check a product review before you buy? 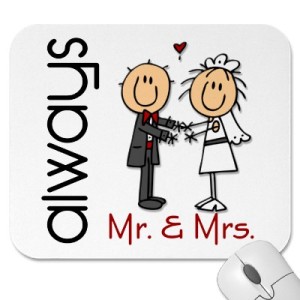 21. One out of six couples married in the U.S. last year met via social media (Chadwick Martin Bailey research 2010)
22. What happens in Vegas stays on YouTube, Flickr, Twitter, Facebook…
23. The #2 largest search engine in the world is YouTube
24. Wikipedia has over 13 million articles…some studies show it’s more accurate than Encyclopedia Britannica…78% of these articles are non-English
25. Roughly 25% of all Americans in the past month said they watched a short video…on their phone
26. According to Jeff Bezos 35% of book sales on Amazon are for the Kindle when available
27. Exactly 24 of the 25 largest newspapers are experiencing record declines in circulation because we no longer search for the news, the news finds us
28. More than 1.5 million pieces of content (web links, news stories, blog posts, notes, photos, etc.) are shared on Facebook…daily
29. Successful companies in social media act like Dale Carnegie – Listening first, selling second
30. Successful companies in social media act more like party planners, aggregators, and content providers than traditional advertisers

Is Social Media changing the world? What are your thoughts?